Why More Tech Companies Are Moving to Downtown Los Angeles

While it’s common for tech startups to choose Silicon Beach to establish their business, a new trend is emerging among these companies. Many are moving to downtown Los Angeles instead, where they can get more bang for their buck.

There’s been a dramatic shift in the revitalization of downtown Los Angeles. 15 years ago, offices did exist downtown, but when the clock struck five it became a ghost town. Now, with an influx in residential, retail, and restaurants, people live, work, and play in downtown Los Angeles.

Over the past two decades, downtown Los Angeles has evolved from the dark and abandoned neighborhood it once was into a revitalized urban community full of cultural and architectural heritage. The approval of the Adaptive Reuse Ordinance in 1999 started a revival of the downtown area, as it created thousands of new housing units. Things began to change when the Staples Center opened in 1999, as well as L.A. Live in 2009.  Older and historic buildings were repurposed into lofts and apartments, trendy restaurants and bars popped up, and downtown came back to life. 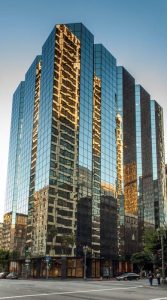 In the heart of DTLA, 600 Wilshire embodies creativity and corporate sophistication.

Now a vibrant and lively neighborhood, downtown Los Angeles also offers much larger office spaces. Andrew Tashjian, managing director of Cushman & Wakefield (who brokers the leases for Onni owned building 600 Wilshire), says that the changes in the office market in downtown L.A. have been a reflection of a generational shift. “As more of the baby boomers move into retirement and away from being the key decision makers, a new generation of leaders is going to seek after creative space, open space, collaborative space, and lifestyle space. It’s an inviting environment,” Tashjian says.

Digital content studio Portal A made the jump from one Onni owned building to another last fall. Already downtown at the LA Times Building, they needed a bigger space. Moving to 600 Wilshire, Portal A doubled their square footage, landing in a 4,000 square foot office. The tech-friendly building offers high ceilings, polished concrete floors, and amenities like a gym and game lounge. “Being able to look out see the real world and not be cloistered in an office park, to me it’s really inspiring” says Zach Blume, co-founder and managing partner of Portal A. 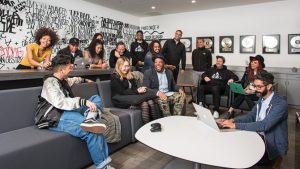 CEO Sanjay Sharma of All Def Digital leads meeting a meeting in the conference room at 600 Wilshire. [Source]

As one of the most central locations to get to, moving downtown has reduced the commute for several companies. Sanjay Sharma, CEO of All Def Digital, says “Lots of our team lives downtown, takes the metro downtown, or rides their bike, so it’s just a more cosmopolitan urban feel.” All Def made the move from Culver City to downtown in 2016, where they are now at 600 Wilshire. “It’s core to the company’s mission to be representative of urban hip hop culture,” says Sharma. “Downtown Los Angeles should be the home, and playing a role in the revitalization of downtown is important to us.”

Also at 600 Wilshire is Evite, who uses a tech-firm-trendy open floor plan with no private offices to enhance collaboration, and online company HelloGiggles, which recently moved into the penthouse.

Interested in leasing opportunities in downtown Los Angeles? With several real estate developments in the area, visit our website or contact our sales team to find the right fit for you.