If you’ve happened to walk past CentreView, you may have noticed a life-size camel at the corner of 13th and Lonsdale in the heart of North Vancouver! After just being publicly unveiled this week, we’re excited to introduce and explain the significance of why this public art was chosen for CentreView, North Vancouver’s newest exclusive community. Based on a little-known incident from British Columbia’s history, the statue draws on one of the more obscure events that make up our past.

After a failed attempt by the U.S. Army at using camels as pack animals in the Southwest United States, Frank Laumeister brought several camels back to B.C. The veteran of the U.S. Camel Corps used the animals to carry freight on the Douglas Road, Old Cariboo Road, and other gold rush-era routes. However, the camels’ feet were cut up due to the rocky trails and roads, and hostility transpired between camels and the other animals. Laumeister put the camels out to pasture, but some managed to escape, leaving a few feral camels roaming B.C. until the 1930’s.

While the horse and rider are a theme that has persisted in art, a prospector riding a camel is much more unusual — especially in the Pacific Northwest. It seems unlikely, as does the idea of feral camels living so close to home. The camel statue at CentreView is modeled after The Lady, who was the last known surviving Cariboo camel in British Columbia. The artist of this was also inspired by the unique gold rush history of British Columbia. By using the curious appearance of a camel, the statue challenges conventional representations of beauty and heroism which are conveyed by a horse. It redefines the landscape of the Pacific Northwest as a monument to time when camels lived alongside caribou. 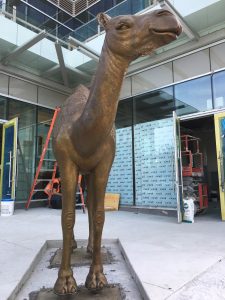 As the largest mammal in its native range, the statue represents a camel’s actual size, and is made up of steel frame, rebar, and wire mesh. The project was designed and overseen by lead artist Myfanwy MacLeod, the recipient of several local art awards. Commissioned by the City of Vancouver to create a public artwork for their Olympic and Paralympic Public Art program in 2008, MacLeod comes from a strong artistic background. With over 22 years of experience, she’s worked collaboratively with the fabricators who manage and produce her work.

Only a handful of luxurious homes in North Vancouver remain available for sale at CentreView, call our sales team at 604-988-8540 to learn more or Register now to stay up to date on the latest news!